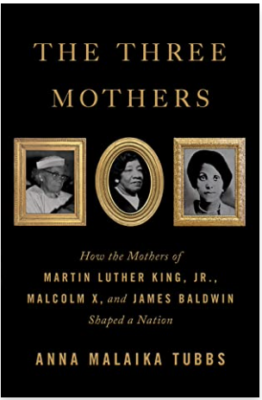 (Feb. 2021) What a wonderful book! Anna Malaika Tubbs has chosen to profile three incredibly important women and she has done it well. Researching women who did not leave behind nearly the body of work, personal history and accomplishments of their three famous sons was a challenge. It was as challenge well met, and stories well told. This book is a good read. And so enlightening.

Each of these women truly deserves to be known in their own right. They were strong women who all three valued education and were educated themselves. Tubbs connects their lives with sociological and historical factors of the time that impacted the trajectory of their lives and those of their children. There is so much here that deserves to be pondered, discussed and centered in our discussions of how to create communities – and a country – where Black families thrive.

One of the greatest shocks of this book was learning that Dr. Martin Luther King, Jr.’s mother Alberta was assassinated while playing the organ at a Sunday service on June 30, 1974. She was gunned down in Ebenezer Baptist Church in Atlanta in front of a packed congregation, her husband, the Rev. Martin Luther King, Sr., her sole remaining child Dr. Christine King Farris, and several of her grandchildren – one of whom tackled the 23 year old gunman. The assailant was captured, tried and sentenced to death. “This was later reduced to life in prison, in part at the insistence of King family members who opposed the death penalty. He died in prison of a stroke in 1995.”

The fact that I did not know this speaks volumes about the erasure of Black women in American history. More importantly than how Alberta King died, however, is how she lived. All of these mothers deserve to have their stories told. Their legacy was how they navigated a life where the odds were stacked against them and raised children who had an impact on this country and in this world.

Anna Malaika Tubbs has done us all a great service in doggedly pursuing this project. Time has already started to erase the scant evidence of their lives and left the author to piece together their narrative from what little was left behind for her to find. Sadly, the women themselves were not interviewed in person while they still lived. Tubbs makes the case for why Black women’s stories need to be captured and written down. Not just for the sake of posterity, but so their families know where they came from and what shaped the women who brought them into this world.

I’m so grateful this book was written so that I could read it.