Catherine Read has a conversation with Bettina Lawton (Esq.) of Lawton Legacy Planning about legal planning. Bettina Lawton is a licensed legal professional who specializes in legal planning for a client’s eventual death or incapacitation. She deals with people from all walks of life, from single adults to married couples with children to seniors of all financial statuses and helps them plan how to meet their objectives in the event of death or incapacitation.

While indisputably important, many people have difficulty talking about, and planning for their eventual incapacitation or death. Over 60% of Americans have no will, or other similar document. According to Bettina Lawton, it is critical that people find a qualified person they can work with in order to make a plan, as even a will alone is not enough. Wills only go into effect after the person has died, so they make no differences in cases where the client is incapacitated or otherwise unable to take care of themselves or others. It is especially important in cases where children are involved, as a failure to have a designated guardian can see children placed into the foster care system when their parents are otherwise unable to take care of them. In Virginia, parents can designate whom they wish to take their children using a Standby Guardianship, which grants their chosen caretakers 30 days of authority, which gives time for the courts to work without sending children into foster care.

Beyond just having a will in the first place, it is also important to make sure your will is up to date. Laws change over time so what you currently have may have unintended consequences if it is not updated. For example, in July of last year Virginia adopted a fiduciary access to digital assets act, which allows a person to designate a beneficiary to access their digital assets, like photos hosted online. Bettina Lawton recommends reviewing your will and other legal plans every three to five years. Generally, only minor changes will be needed, but they can add up to a big difference to the final result.

When planning, it is important to keep in mind the location of your assets. Real estate passes ownership based on the laws of the location it is in, not necessarily the laws of the jurisdiction where the owner lived. Two properties in two different locations are subject to two different laws. This is why Bettina Lawton recommends outside properties be placed in a revocable trust, which changes real estate assets into trust assets and simplifies the process. In Virginia the law now allows for transfer on death deeds, which allows owners to designate a beneficiary who will receive ownership of the deed in the event of the original owners death, allowing property to transfer without going into an estate.

In addition to a will, people should also be planning for what happens if they are unable to make medical decisions. A person retains their legal right to make decisions up until two medical professionals agree that someone is unable to make a choice themselves (either due to inability to speak or inability to understand their situation). People need to make an advanced medical directive to designate who can make medical decisions on their behalf. While the state does designate a list of people who can make the decision in the event you have not made plans 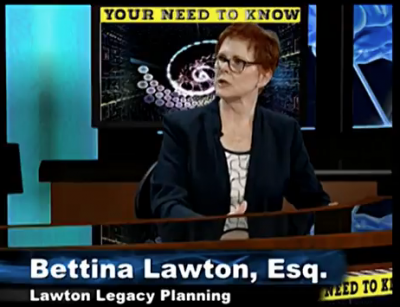 , it can be very hard on the person who is called upon to make the decision, and they might make a decision contrary to your wishes. It is best to designate someone ahead of time, and to make sure that you have written down what your wishes would be in the event of various medical situations.

While it can be a topic hard to discuss, it is important to plan ahead. Doing so makes things easier on those left behind and ensures that you have the final say on how your assets are passed on. According to Bettina Lawton, the best time of year to begin your legacy planning is around the time you pay your taxes, as you frequently need the same fiscal documents in order to make your plans. You need to decide whom it is who can best fulfill your will. Sometimes a spouse or child isn’t the right choice, as financial positions, such as executors, trustees or someone with a designated financial power of attorney needs to either be good with financial details or capable of supervising those who are. You also need to make plans for what happens if your designated person dies or is incapacitated at the same time, or before, you are.

For more information, you can email Bettina Lawton at [email protected] or visit LawtonLegacyPlanning.com for an estate planning guide so you know what information you need and what decisions you should be making.