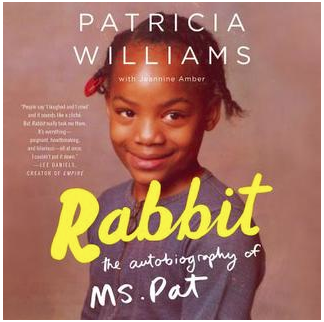 (Oct. 2017) When folks think about the problems of growing up in the hood, they think about what it must feel like to be poor, or hungry, or to have your lights cut off. The struggle nobody talk about is what it feel like to be invisible, or to know it in your heart nobody cares. Mama didn’t want to be famous, she wanted to be seen.

That realization came to Patricia Williams as she began her career as a comedian in Indianapolis in 2010. This audiobook, read by the author, is remarkable on so many levels. Her nickname Rabbit was given to her as a child. The name she uses professionally, Ms. Pat, is what her children’s friends called her. She spent much of her life thinking she had nothing in common with her alcoholic mother who died at 39. Then she realized when she went on stage to do stand up comedy that she also craved to be seen, acknowledged and heard.

She gives her listeners/readers an unvarnished truth about her life that few of us could imagine – growing up in abject poverty with a mother who taught her to roll drunks in her grandfather’s “liquor house” when she was 7. She and her sister Sweetie were molested as children by a friend of their mother’s, and both sisters ended up pregnant as teenagers. Rabbit had her first child at 13 and another at 14. She dropped out of middle school to raise her kids, discovering she could support them pretty well by selling crack – the drug that held Atlanta’s poor neighborhoods in its grip in the 1990’s.

Rabbit did a stint in jail for drug possession with intent to distribute. It meant her two young children were left in the care of their daddy Derrick’s family. Her daughter started her first day of kindergarten while she was in jail. When she got out, she went back to selling drugs – a risky employment but one that supported her kids and allowed her to also help her mother out. It also got her shot at one point.

Along the way, she meets people who help her navigate her teenage years and early 20s. A turning point was finally cutting Derrick loose, which made it possible for her to meet Michael. This man helped her to raise her two children, as well as her sister’s four children for 10 years while Sweetie was in and out of rehab. Then they had two children of their own. It was Michael’s job transfer from Atlanta that put them into the mostly white suburbs of Indianapolis, Indiana.

Doing comedy was not something Rabbit had thought about, but she walks us through all of her failed attempts to get a “regular” job, which was nearly impossible because of her felony record that turned up in background checks. She had gotten her GED, invested money in vocational training, and THEN discovered she would likely never be hired to work in the field for which she had received a certification.

Her first foray into comedy was simply standing up at open mic nights at a local club and telling stories about her life in the hood. She quickly discovered that “it turns out comedy and selling drugs have a lot in common. You have to be quick, work hard and give people what they want.” She also discovered something else from the people who came up to talk to her after her performances.

All those times mama told me white folks were better than me, had me thinkin’ white people all live the easy life. But that woman isn’t the only one who has come up to me after a show to tell me about her shitty childhood, or her drug addicted parents. I was a grown woman before I found out black folks aren’t the only ones who had hard times. Everybody got a struggle. Nobody get through this life easy.

She started opening for another comic at clubs that had a largely black audience. As she honed her material, other comedians started to give her opportunities to work with them as well, and then her big break came when she was asked by Marc Maron to be a guest on his WTF podcast. She’s now been a guest on a number of his podcasts and that has led to bookings at clubs around the country.

While I’m sure the printed book is wonderful, I wouldn’t trade the experience of this woman telling me her story for anything. It’s a remarkable journey of resilience with a happy ending. While her early life is far from unique, in fact it’s all too common in many poor communities, her ability to find her way forward out of all of that is a true odyssey, well told.