(Mar. 7, 2018) Catherine Read interviews Dr. Klara Bilgin, Dean of Public and International Affairs at Virginia International University, about the upcoming Russian elections to be held on March 18, 2018. Although Vladimir Putin is widely expected to win the elections, there is much that can be learned about Russian electoral system which provides insights into what is happening in the country.

On December 6th Vladimir Putin announced that he would seek reelection for his second consecutive term, and his fourth term overall. Putin served his first two consecutive terms from 2000-2008, after which he was barred from running again. During Dmitry Medvedev’s administration the constitution was changed to a 6-year term. Putin ran again in 2012, and his 6-year term is now ending. Should he be elected again, which is widely expected, he would be 72 years old at the end of this next term. It is not expected that he will attempt to change the constitution and try to run for another term, more likely he will look at grooming his successor.

Dr. Bilgin shared that the office of the presidency in Russia is quite strong. The Russian President can institute decrees and legislative initiatives without oversight of the legislative branch. Even if there was stronger oversight, the Duma (lower house of parliament) is held by United Russia, the party that is closest to Putin. The party holds 350 of the 400 seats in that body, with only 50 comprising the opposition. This allows Putin to have complete control over the Executive and Legislative process. The Russian Judiciary is made up of 19 Justices, all appointed by the President; so neither does that branch serve as a check on the Executive. 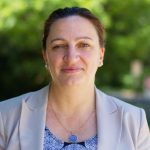 Although Putin is expected to win this election, it is interesting to look at his opponents in this race. Ksenia Sobchak, a TV anchor, opposition activist and journalist announced in October of 2017 that she would run for President. Sobchak is the first female candidate in 14 years, and the youngest candidate to run since 2004. Dr. Bilgin heard her speak recently here in Washington, DC and was very impressed with her knowledge of the issues. Her ideas were quite liberal in the Russian context and even touched on some feminist themes. Sobchak admits she is not seriously running for office, but is using this platform as a “dry run” for the Russian Parliamentary elections in 2021. She also represents a young challenger from deep inside the current regime, as her father was a mentor to Vladimir Putin.

Opposition leader Alexei Navalny, a 41-year-old lawyer whose protests and corruptions exposes of the sometimes gilded lives of government officials have irked the Kremlin, has been barred from the contest over what he says is a trumped up suspended prison sentence. Unable to challenge the 65 year old Putin at the ballot box, and kept off state TV, he has devised a different strategy: A long-term political siege of a man most Russians consider invincible. He has energized young voters in the cities, and has called for a boycott of the election. His goal is to reduce the votes by 10% to show that his cause has force and power behind it.   Navalny also plans to deploy tens of thousands of observers on Election Day to chronicle the event and to hopefully discourage fraud.

In taking a global look at the Russian electorate, 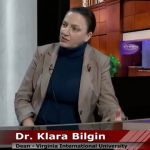 Dr. Bilgin shared that it is important to understand the mindset of the Russian voters, who are conservative by nature. After living through the tumultuous times of the 1990’s under Boris Yeltzin, they find a sense of comfort in what they know. Today the economy is somewhat stable, with inflation at around 7% and growth in the 1.7-1.8% range. The older Russian voters, especially, have no desire to return to the instability that marked the recent past. Therefore, they are likely to reward Putin for keeping the country stable as opposed to taking a chance on someone new and unknown.